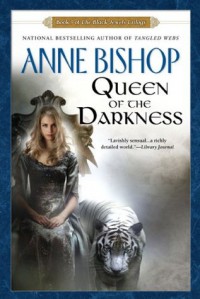 This was not a great conclusion to a good series. It was all fairly well written, but I didn't care so much for the plot and the construction, the characters and how the story played out.

This had  a lot of trust issues, a lot of bad management (on both sides), a very unsatisfying "romance" and a lot of gore.

What I disliked most, was this deja vue feeling. Nobody trusted Jaenelle (not to speak of Daemon). Even her own friends. Ok, she didn't explain her decisions in any way, but still. She is the bad ass Witch.

What irked me most was the general imcompetence and stupidity of the evil bitches. Oh my. That was really pathetic. Each attempt more clumsy than the one before.

Both already rotting as punishment.

Power-wise no match for ANYONE in Jaenelle's team.

And the plot holes. They really livened up the landscape...

Just for info: Just because you say "Killing my two worst enemies and nemeses will not change the coming war" doesn't make it true. Or plausible. Or still a bad idea to kill them off first.

There is no real explanation anywhere.

The big finale with killing off anybody associated with the "bad blood" has to happen. No way around. No real option for anybody to reconsider their choices. Nope. They have been corrupted, they have to die. No discussion, no individual decisions.

What kind of management is this? If killing is your solution, it would have been better to start early, so a lot of innocents wouldn't have to die a gruesome death, because you wait for a big finale. Really.

Then of course: without the big finale no nail-biting fear that Jaenelle killed herself while trying to kill all the bad guys without offing the good ones.

I am glad I read "Written in red" first (which I liked) - because I wouldn't have picked that one up afterwards.